Calgary once had an extensive street car network. Using a copy of a 1945 map, I created a streetcar system map of the now defunct Calgary Municipal Railway. The result shows a vastly different fixed rail transit network than we see today. 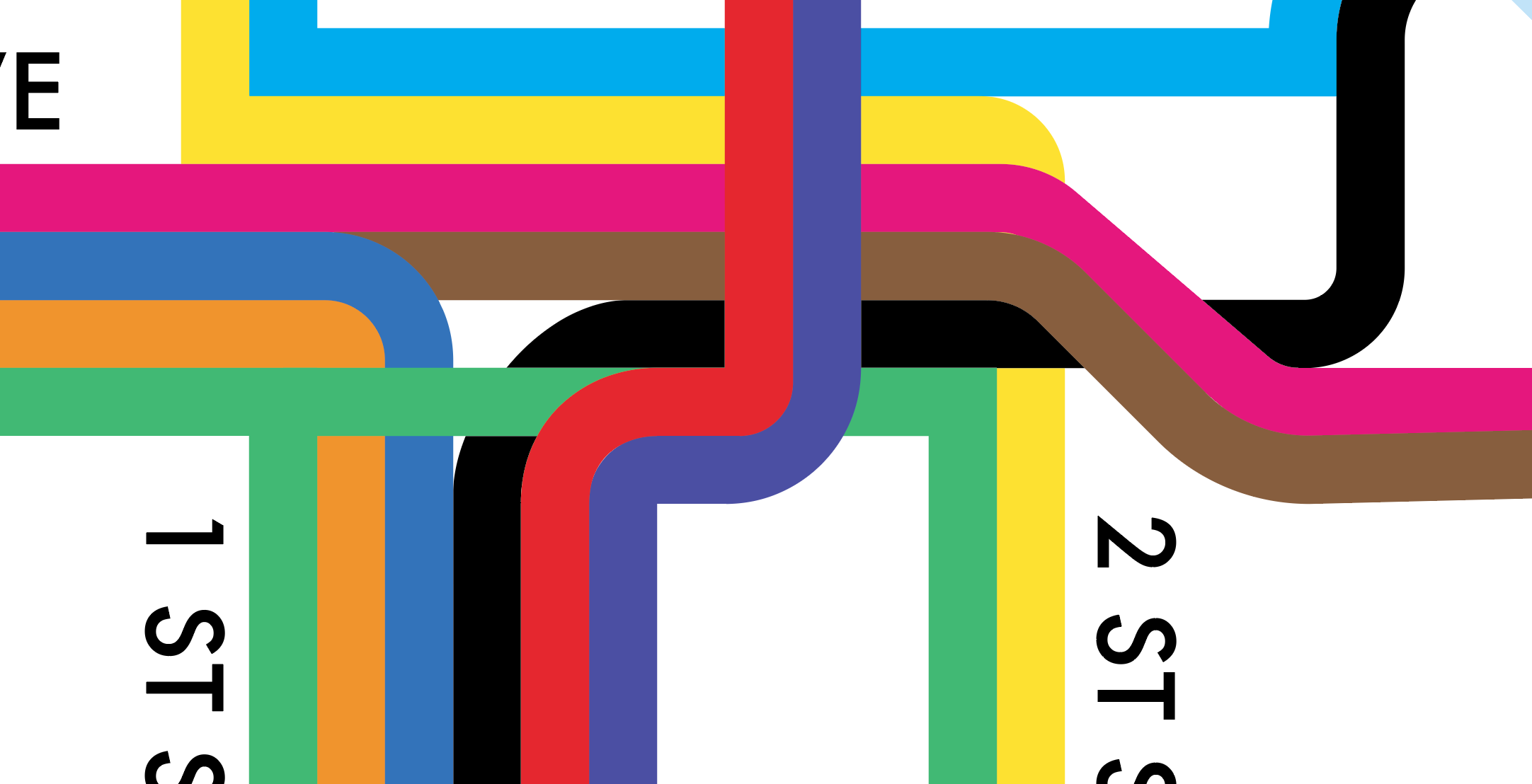 The Guardian published an article about artist Jake Berman who mapped historic public transit maps of different cities in North America and compared them to current day system maps. It shows a striking visualization of how, in almost all cases, public transit (rail) systems have diminished over a generation and replaced with skeletons of their former systems. The causes have been controversial at times. There’s always been a consipracy that in postwar Los Angeles and Detroit automobile companies purchased struggling street car systems, dismantling them and replacing the rail cars with buses. But more likely, it’s possible that streetcars of that era simply couldn’t compete with the automobile and the subsidized system of roads, freeways and bridges built for cars. 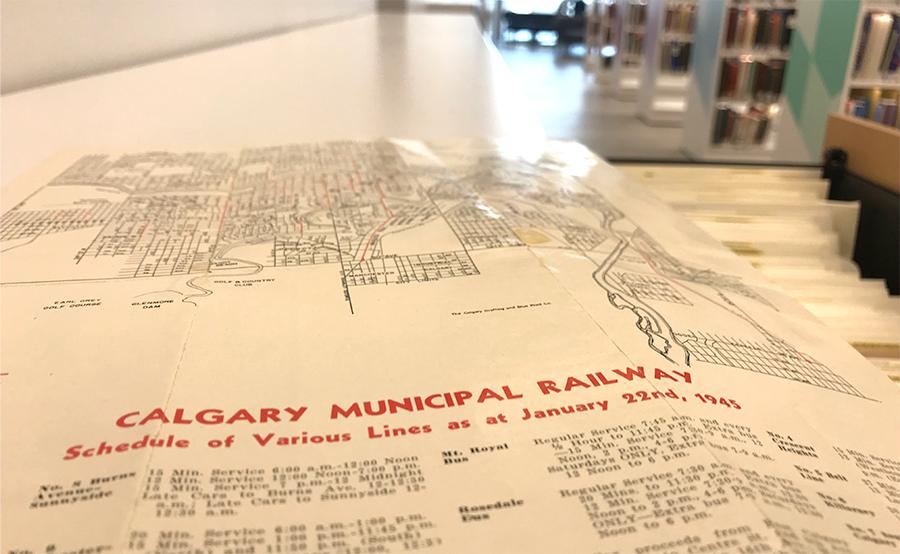 Copy of 1945 Calgary Municipal Railway map at the Central Library

I was interested to see how Calgary’s now defunct Municipal Railway looked like before it was ultimately dismantled in the 1950s. I wasn’t able to find any online resources that had either a schematic or actual system map so that lead me to do some research of my own. Fortunately, the Central Library had a copy of a customer map and time table from 1945 [any excuse to visit the new library!]. 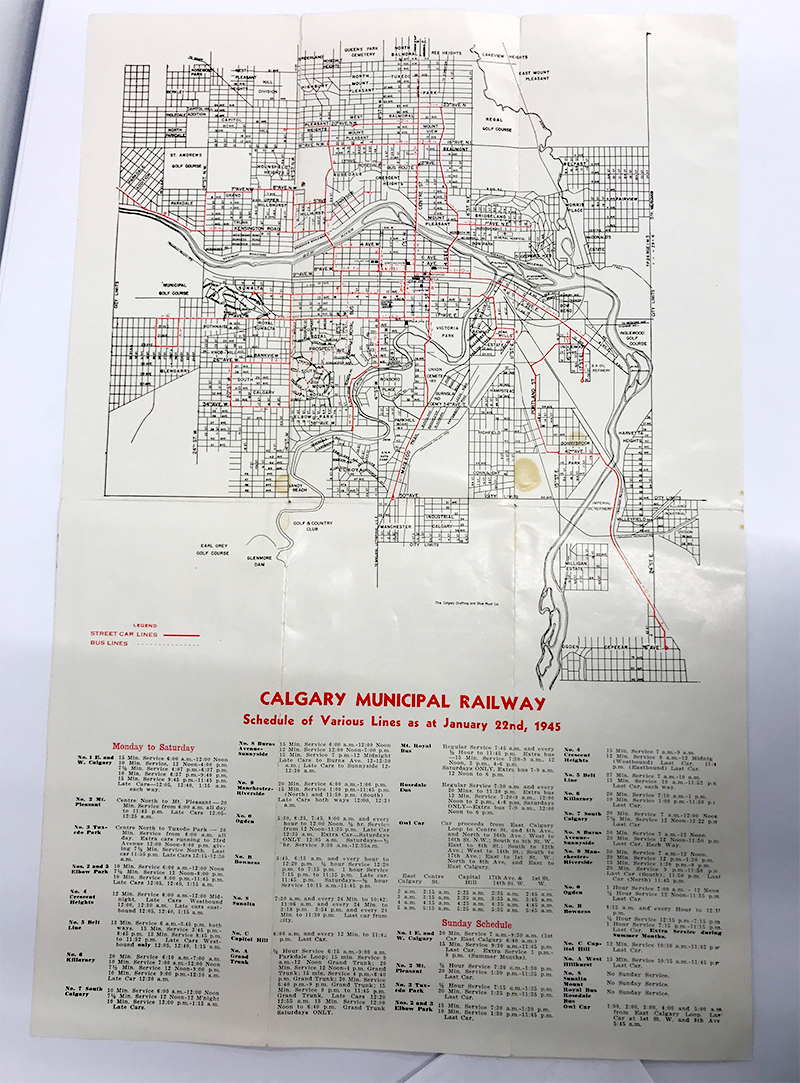 Copy of 1945 Calgary Municipal Railway map at the Central Library

Calgary’s streetcar system started out as the Calgary Electric Railway in 1909, rapidly growing in the 1910s to include five lines. The system eventually provided service to the outlying areas of Bowness, Ogden and Sarcee military camp. It even had its’ own sightseeing car, “Calgary’s Pride and Joy”. The ultimate build out included thirteen lines extending to 30 Ave in the north, Ogden in the east, south to Elbow Park and as far west as Bowness Park. 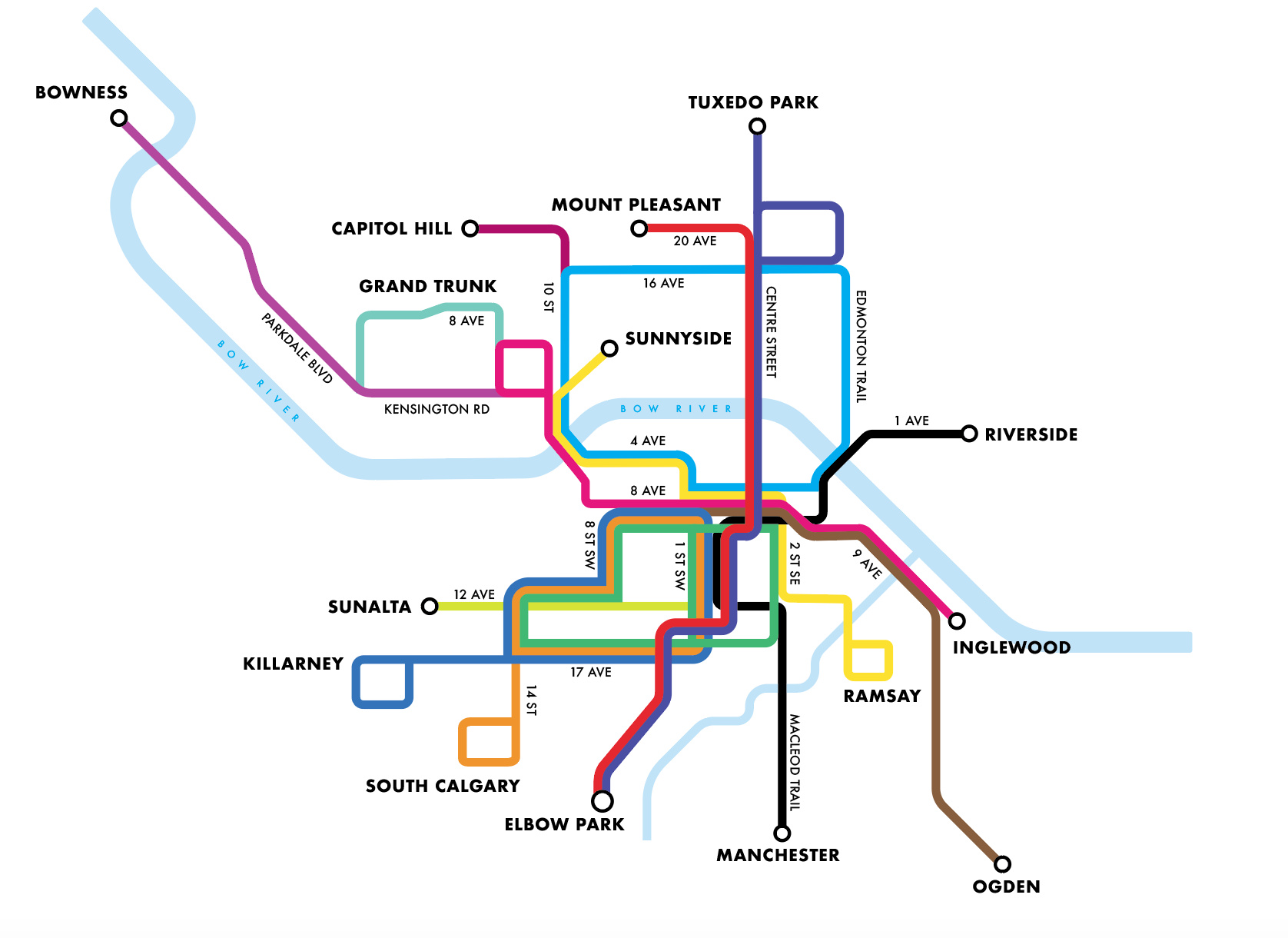 Visualizing the original 1945 map is difficult since it does not effectively show overlapping routes. My goal was to create a more modernized system map so I could visualize the extent, connections and overlaps of the streetcar lines. The contemporary map design for transit systems we see all over the world has its origins in the London Underground maps of the 1930s. By de-emphasizing the distance characteristic of the map and focusing on the topology of the system, we get a more readable and effective visualization. 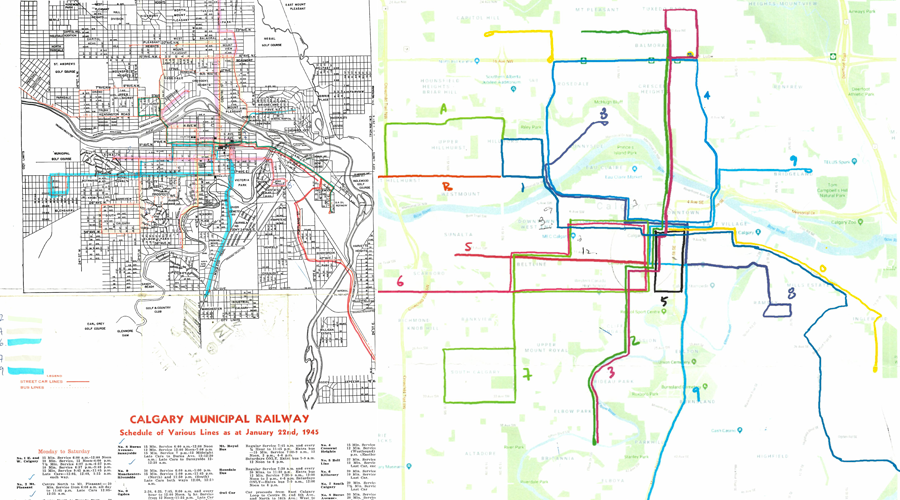 Transit map designer Cameron Booth has a great tutorial on designing a transit map and I used his guide as starting point. It took some time to decipher the 1945 map and trace out the routes. I’ll admit the map wasn’t clear in some areas so I made some logical guesses about route directions. I also used a 1946 city map from the University of Calgary digital map collection to clarify some areas. Then, focusing on the part of the map with the most connections (1 ST SW), I sketched out a rough orientation of routes and planned out the overall system map. Keeping with artist Jake Berman’s original concept, I tried to maintain the typography and design characteristics of the 1945 original. I found that once you start with the most connected area, the rest of the map kind of sorts itself out and comes together. Through numerous iterations, I finally ended up with something that looks passable as a transit map. 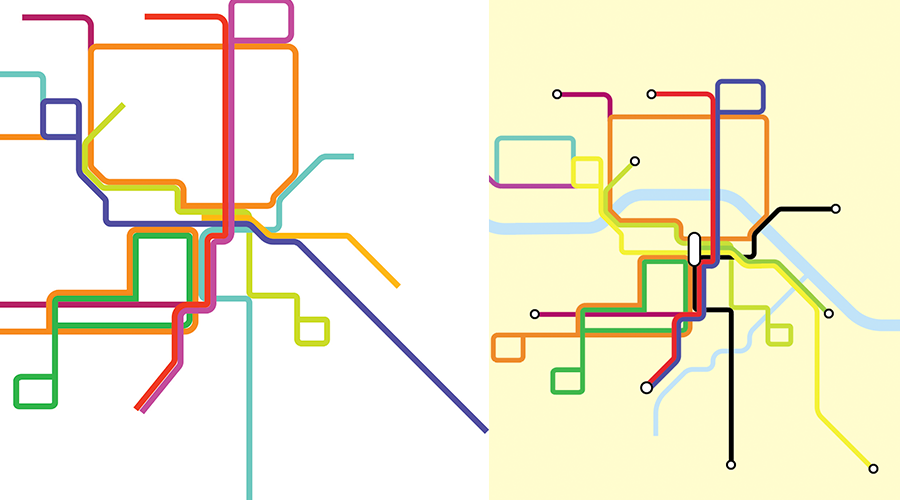 Iterations of the streetcar map design

Comparing the streetcar to Ctrain map

The result shows a vastly different fixed rail transit system than we see today with the CTrain. The dense connections of lines in the inner city have been replaced by lines spurring to the suburbs. To visualize the comparison, I made up a simple slider comparison page that overlays the 1945 and 2019 maps. Although the demise of Calgary’s streetcars was probably inevitable, it’s interesting to think about what it would look like it were it still around today.

link to the map